The first spread of the first issue of my first original series was... important, to say the least. After an opening page full of dialogue and vague shots of a city through clouds, I needed to grab the eye of the readers as well as give them some space from dialogue but at the same time make sure they see the explosion that was happening on the page. That explosion subsequently leads to the events in the following pages so it needed the highest attention, but at the same time, needed to be somewhat withdrawn so the rest of the scenery could be soaked up and the comic didn't say "Look, explosions - great, huh?" 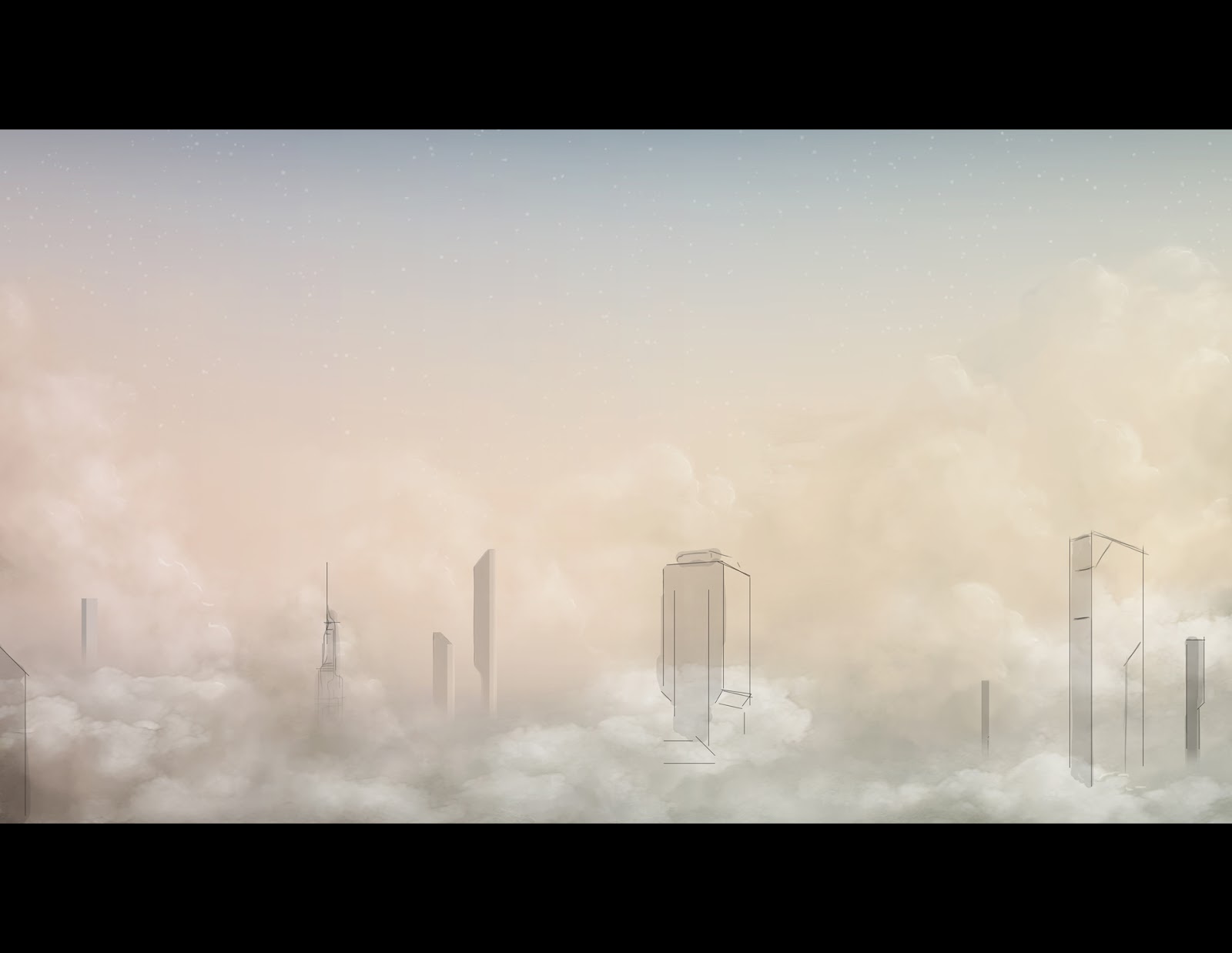 I thought using 'letterbox' bars would create that panoramic view I was going for, as well as a cinematic one, which often doesn't hurt. It adds a focus, it sets the table. The black is the basic canvas in a way- it's what happens when you don't make art, so it brings attention to what is there and makes it seem important. At least, that's one idea. Maybe it's just because we have the black bars so associated with films that we just expect it to mean some benchmark of quality.

Either way, I began with some soft morning colors. I quickly blotted some cloud rolls in to show me how high these spacescrapers were going to be. I also started to play with different building designs. 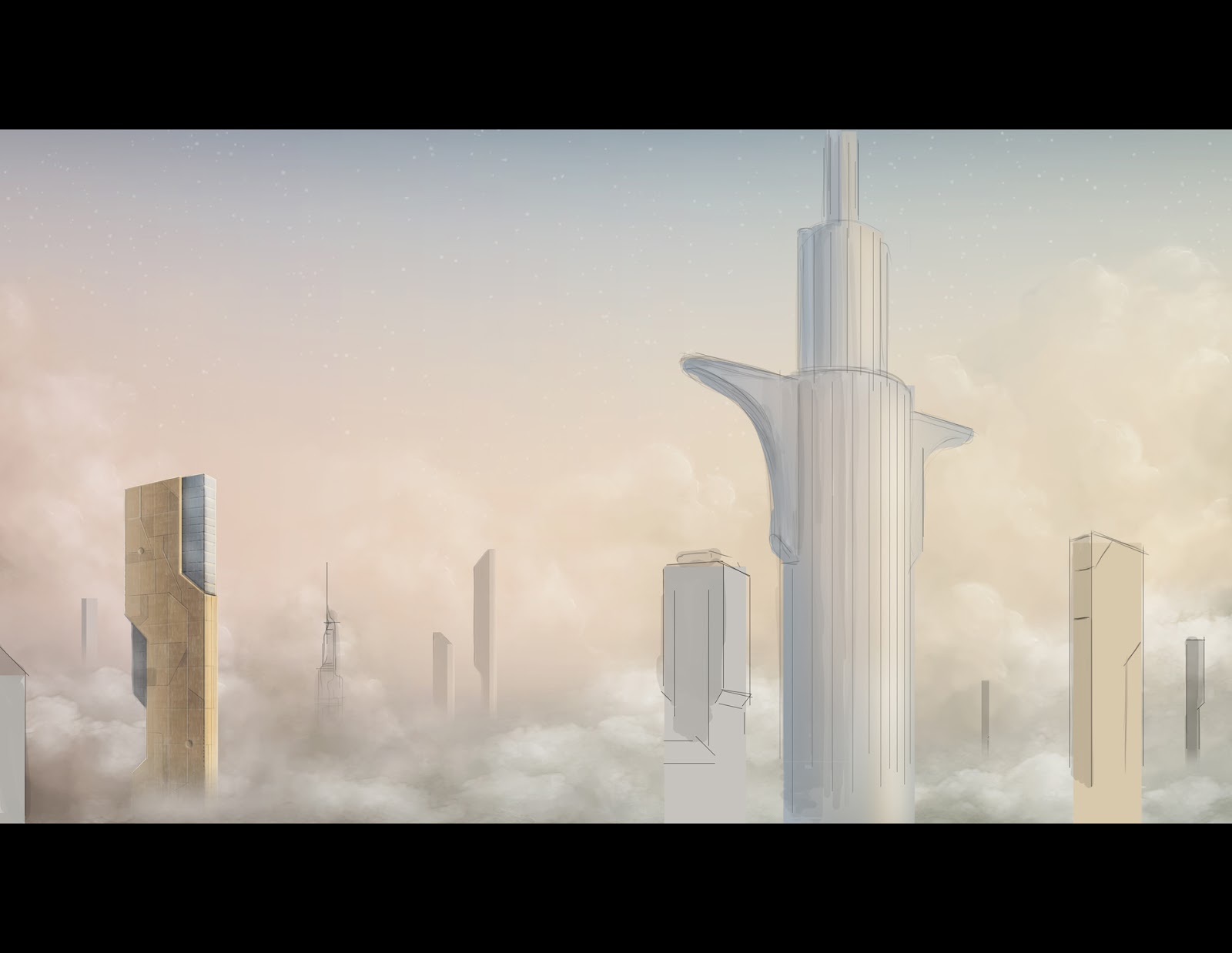 Here you can see some of those buildings getting detailed. The tallest building on the right had already received its design years ago in sketchbooks as I came up with this universe. It's the District Control tower and it's shape is iconic to the Mayflower story. Especially because it's the one that gets blown up. 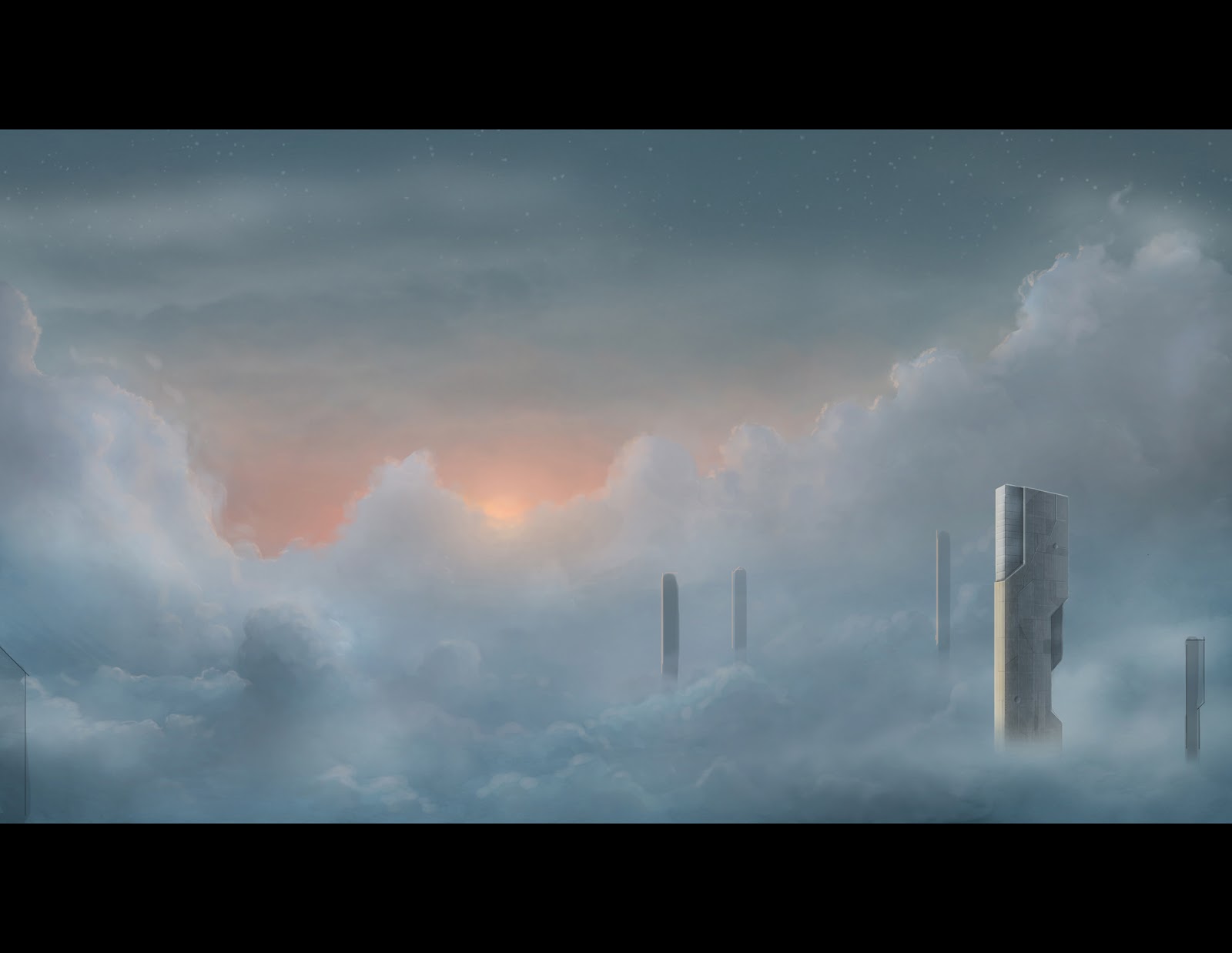 But the problem with all that art was: I hated it. I started again almost completely from scratch and set up a much more interesting cloud system. I was worried about the sun, as when I would eventually get to that said explosion, and it would be competing with it. So I kept it subdued for now. Eventually I'd add a few freckles of intense white where it breached the cloud line.

It was also at this point in the creation of the comic that the beginning sequence switched to dusk as opposed to dawn, for various story and visual reasons, hence the much darker image. 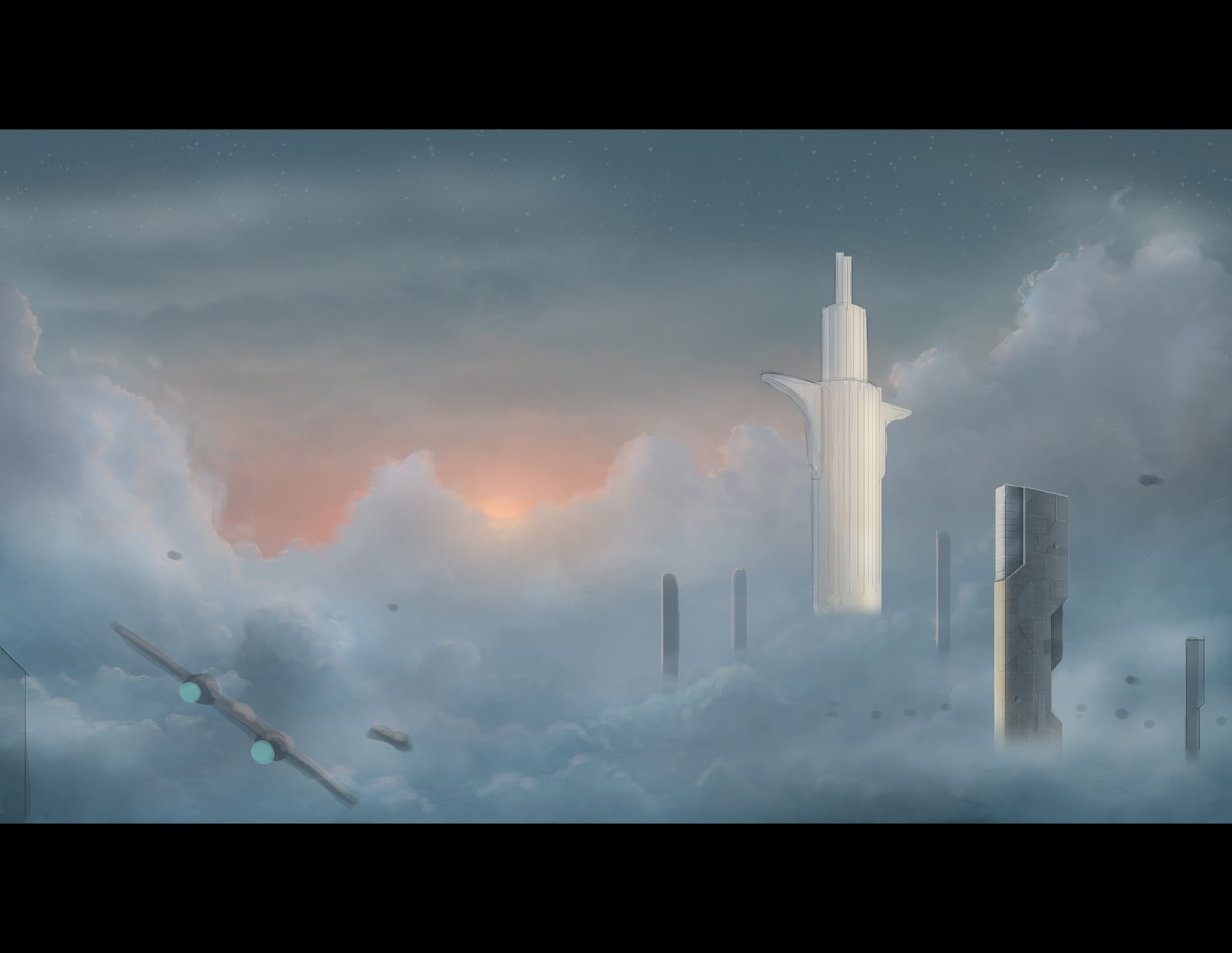 Re-inserted the District Control tower here and began adding flying transports to give the composition scale and flow. 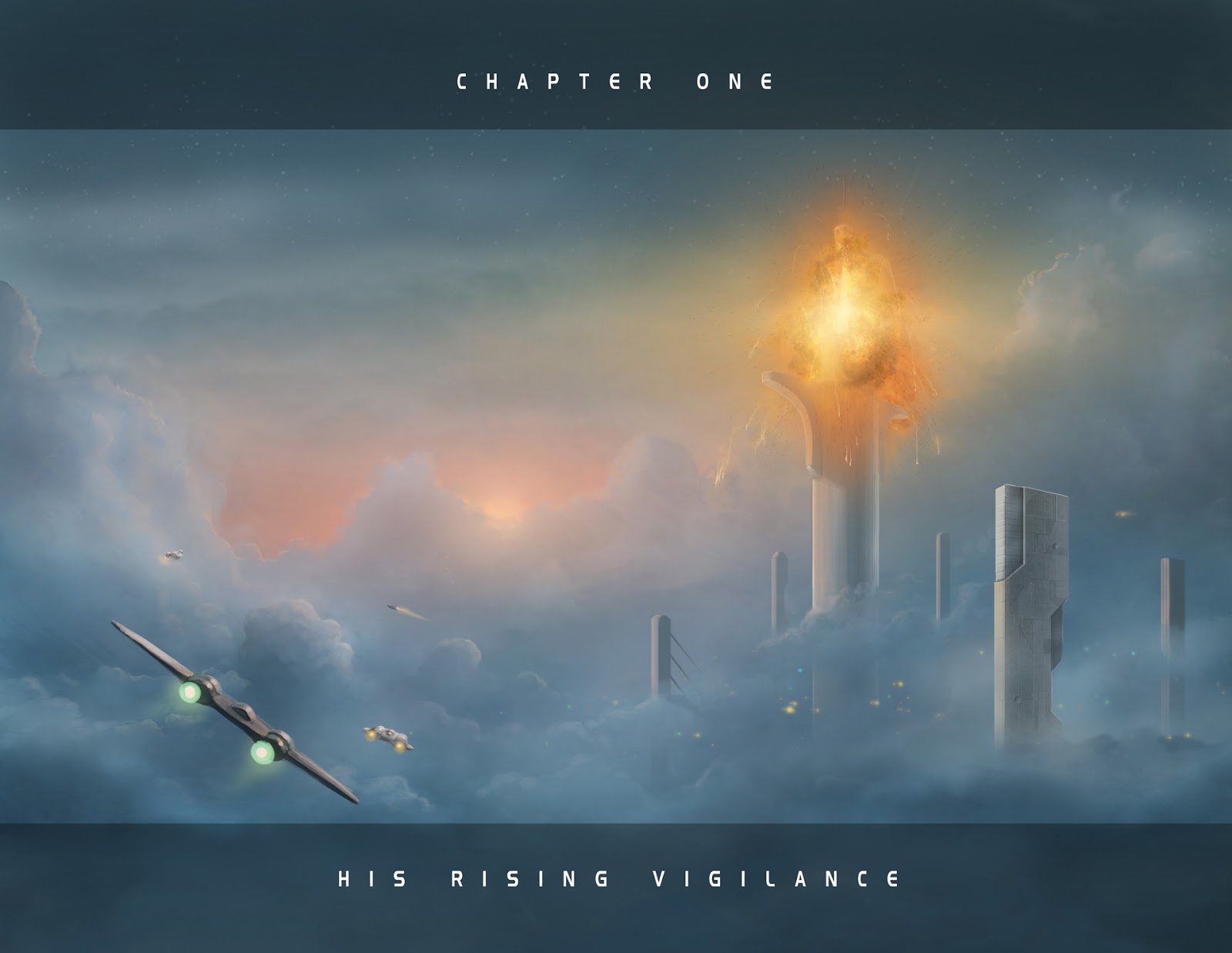 This can especially be seen once I got to the engine glows and trails, and began to add in more details across the whole image. The little bridges and suspension structures in the mist really helped it feel expansive and interconnected.

The explosion itself was fairly easy, but towards the end of it you have to find that perfect balance of contrast to make the explosion look active and dangerous without making the colors just white and orange. There has to be some gradation in there or else it's simply not very pretty to look at it. That's a mistake I was making across all my art not long ago.

You can also see above that the letterbox bars became slightly transparent and grabbed hold of the title text for the story arc. This version was used for the preview edition of issue #1. 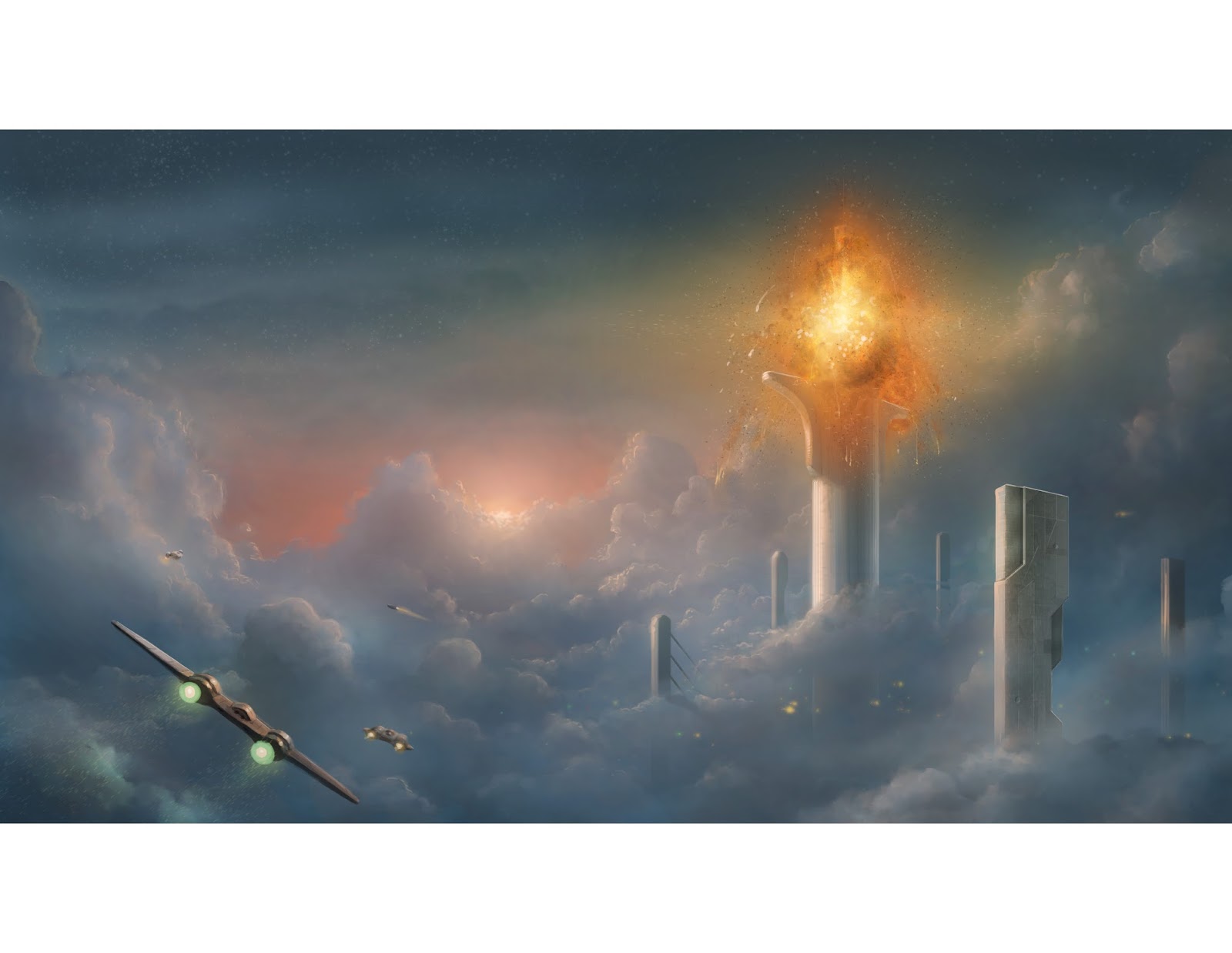 After extended viewing, I wasn't quite happy with it and had the opportunity to revise it for the release of the full issue. As I said, this image was more important than almost all of the other pages, so it required my obsessiveness.

I detailed the ships a bit more, tweaked the fireball, and added more convincing sun glares on the metal and glass buildings. You can also see that tweaked sun that I mentioned above. The sun also go its own ray of light heading down between the farthest clouds to add another diagonal to move your eye around the pages.

The clouds themselves had the most important revision. By simply becoming far more detailed, they were able to convey more scale to the image. These are massive, dynamic clouds, and these spacescrapers are breaching them. It needs to be impressive.

The transparent letterbox became white like many of the paneling frames of the full issue. White borders seemed to match the style and themes of Mayflower better, because of its association with optimistic, golden age sci-fi. 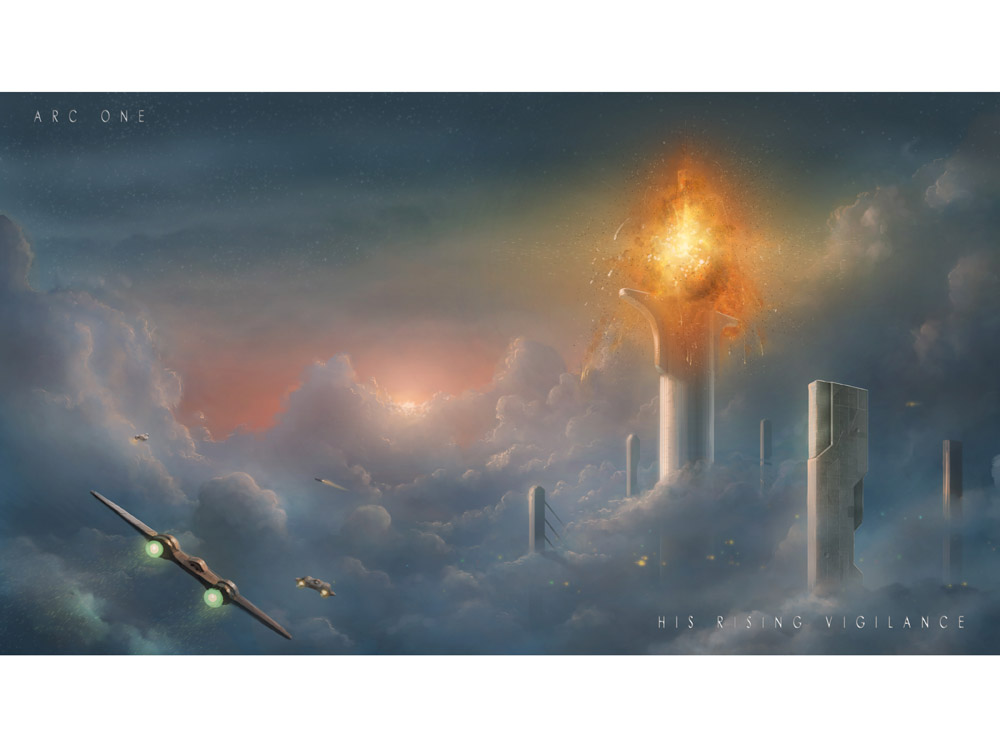 Here you can see the final pages with new, more subtle title text overlaid on the art.

You can find out more about Mayflower and read this first issue for free at www.MayflowerComic.com.
Posted by Unknown at 3:54 PM No comments: