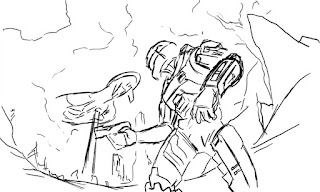 For this Halo fan art, in the vein of trying to emulate professional concept art or illustration, I first started out with sketching in a notepad. 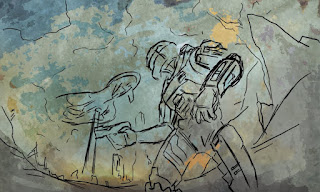 Then I put a base of digital paint down in a variety of brushes and shapes and colors, which helped me keep a 'painted' look throughout the process. If I start to lose that feel later on, then I would grab that layer and copy more versions of it above everything else. 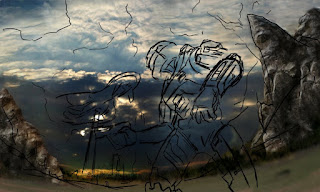 I start to use pieces of photos that I've taken in the last few years (part of an on-going attempt to photo any texture, reference, or anything I might need for collage or reference in the future) and crop those in. Almost all the photos I used for this particular piece were taken just a few weeks before I began it at a park nearby at sunset.

I'll rearrange the photos, stretch and distort, and paint atop of them so it doesn't look out of place. Concept art seems to often try to take advantage of photos and screenshots to speed up the process or help the piece look more realistic or fit in with the desired aesthetic. The hard part is making the final image look cohesive. 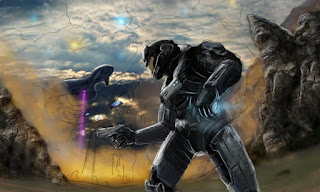 Next, I just start really painting. I looked at screenshots from Halo 2 and 3 for the Covenant cruiser, as well as screenshots from Halo 1 for the dropships in the background. But the big reference here was the Reach VG trailer which inspired all the colors and tone I was trying to go for, in addition to being my only source for the Lone Wolf's armor. That was by far the most frustrating part of the piece. Man, is it detailed! 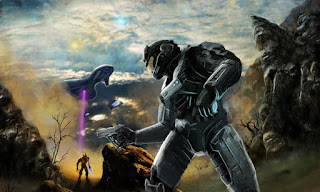 I went back to the background for a bit, added the Elite and some trees and grass and rocks, and then worked all over so no one part of the piece received too much attention. I try to do a pass over everything every few steps. 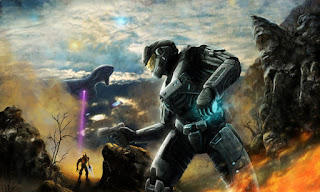 I started to notice that I really wasn't that correct with the Wolf's helmet and other places so I spent a huge amount of time revising it all and pouring over all the details to make sure it was pretty close to what I could see in the trailer. I guess you'd call this and the last step the 'rendering' stage, when everything starts to become detailed, realistic, and finalized. I also tried out some fire in front of the Spartan III and added a nice layer of glare to his armor.

At this point, I show it to my girlfriend or to anyone who will look at it and get some feedback. 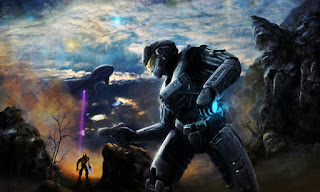 The fire didn't make the cut, and my girlfriend thought the piece needed to be darker to add some more drama and intensity to it. So then I continued to tweak minute little details, things most people probably wouldn't even notice, as well as adding some more layers of that initial base coat of paint from earlier, this time tinted a dark blue, overtop everything, giving it that drama it needed. Done!
Posted by Anonymous at 10:12 AM No comments: